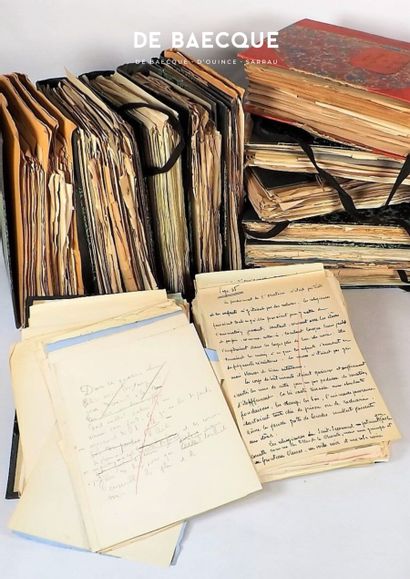 From lot 1 to lot 199: Let's put back in the collective memory of Lyon the printer Louis Perrin (1799-1865) who revived the tradition of the great printers of the XVIth century who made the reputation of Lyon far beyond its borders.

At the beginning of the 19th century, only religious works were printed here. The production of Louis Perrin, original, luxurious, inventive, was to shake up this grey panorama somewhat.

In 1846, when A. de Boissieu ordered his antique inscriptions, Perrin gave up the use of the modern typefaces he had at his disposal; he indicated this in a letter to the Count of Soultrait:

- " ... The Louise Labé printed in 1824 makes me feel like a fake... I want to repair my wrongs and to give in the future my reprints more intelligible and more true, in spite of the fashion...".

Perrin is going to draw a new alphabet that he notes on the ancient stones. These letters, both strict and elegant, where the U's merge with the V's, where the lower case S's take on the appearance of F's, will become the Augustaux.

From then on, the works follow one another, each one more beautiful than the other, even more meticulous. In Lyon, people swear by Perrin, he is known in Europe, the great A. Firmin Didot paid tribute to him and the success obtained at the 1855 Exhibition proved once again that Lyon could claim the paternity of a great Master of the Book.

From lot 200 to lot 230: "HENRI BERAUD, born in Lyon in 1885, is undoubtedly the greatest writer of Lyon, the one who best told the story of the little people of the Croix-Rousse and the traboules. His double Goncourt prize in 1922, for a pochad (Le Martyre de l'obèse) and for a historical novel of a very classical style (Le Vitriol de lune) does not weigh heavily in comparison with his formidable memoirs of a little Gone, then of a mirific Lyonnais and finally of a martyr of the Epuration: "La gerbe d'or, qu'as-tu fais de ta jeunesse, les derniers beaux jours, la chasse au lampiste, TF677", masterpieces among masterpieces.

What is less known is that, convict in Saint-Martin-de-Ré, after the war, sentenced to death and pardoned in-extremis, Béraud also tried his hand at detective stories. Banned from publication under his own name, he signed his wife's name Germaine Béraud, "On tue pour moins, (1950)", and wrote several other detective novels. But the disease was going to prevent him from publishing them, and these works remained in the papers of Béraud..." (Francis Bergeron).

From lot 231 to lot 442: Printers, photographers and illustrators

With your consent, we would like to use cookies placed by us on this site. Some of these cookies are strictly necessary for the smooth running of the site. Others are used to:

Your consent to the installation of non-strictly necessary cookies is free and can be withdrawn or given at any time.

By allowing these cookies, you agree to the deposit, reading and use of tracking technologies necessary for their proper functioning.
Read more about our privacy policy.